In their recent publication “Improving the social cost of nitrous oxide“ in Nature Climate Change, Kanter et al. argue for introducing stricter regulations of N2O emissions. The scientists highlight not only the high global warming potential of N2O, – 273 times that of CO2 – but also its negative effects on the environment, economy and society as a whole.

The latter is conceptualized as social costs – the monetary value of the net harm caused to (including but not limited to) human health effects, ecosystems, net agricultural productivity as well as damage from increased disasters,
According to the technical support document of Interagency Working Group on Social Cost of Greenhouse Gases, the cost of releasing one metric ton of nitrous oxide is $18,000. In comparison, releasing a ton of carbon dioxide costs $51, while emitting one ton of methane amounts to $1500. Technical abatement costs for N2O emissions from nitric acid production range from €0.90 to €3.20/tCO2eq depending on the abatement equipment and specific plant characteristics. 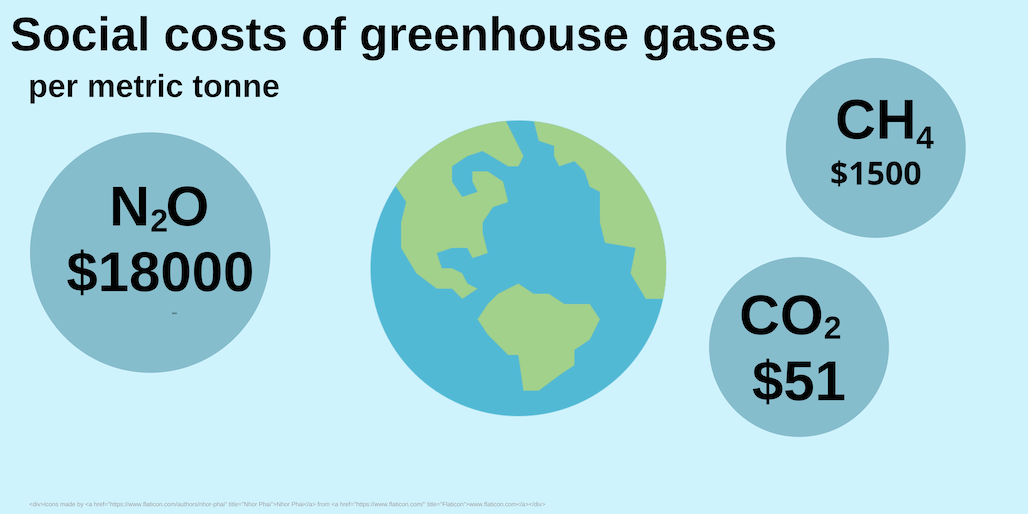 Kanter et al. argue that even such high numbers are underestimated, and that current estimations of the social costs of N2O should be revisited. First and foremost, the social costs of N2O do not take into account its stratospheric ozone impact. After implementing the Montreal Protocol and the phase-out of CFCs and other ozone-depleting substances, N2O became the most important ozone-depleting substance in the world. Further, these estimations omit a unique feature of the N cycle known as the N cascade. Once converted from atmospheric N2, one atom of N can be easily shifted between different reactive N compounds which can be harmful to the environment. In other words, N2O emitted in the atmosphere influence other forms of N pollution.

For these reasons, Kanter et al. argue for the revisions of N2O social costs and the introduction of stricter policies regulating these emissions. Policymakers in western countries already take into account the social costs of GHG developing national policies. These scientific findings are about to influence international climate policy, strengthening the global trend towards lowering nitrous oxide emissions.